Google Trends data suggests we’ve been looking to buy beer online since before 2008.

However the data does show a massive increase in interest for craft beer, starting around 2012-13, with no sign of slowing down.

Although we’ve been able to buy beer online for a long time now, the number of websites with beer shops and beer home delivery has exploded. Craft beer subscriptions are becoming really popular now too.

Every year, more and more breweries are offering the opportunity to order beer online as another revenue stream to their brewery shops.

In this article, we’ve shortlisted some of the best online beer shops in the UK.

Adnams is famous in the UK for brewing great real ales from their coastal home in Southwold, Suffolk.

Fun fact – beer has been brewed at the site where the Adnams brewery sits for at least 670 years. 1345 was the earliest recorded record with the Adnams brothers George and Ernest buying the brewery in 1872.

In 1880, George was apparently eaten by a crocodile on a trip to South Africa!

My favourite beer is brewed by Adnams – Ghost Ship. You can buy Ghost Ship bottles and Ghost Ship cans.

With an ABV of 4.5%, Ghost Ship is described as a ghostly pale ale brewed with malts Pale Ale, Rye Crystal and Cara. The hops come from Citra and other American varieties, all working together to create a delicious citrus pale ale – absolutely perfect for the summer.

It’s really easy to buy beers online at Adnams and they have a great selection for all tastes.

Mosaic is a single hop pale ale full of flavour.

Free delivery over £80. Next day delivery on orders placed before 12pm. Standard delivery only £4.99.

If you’re on a mobile phone, after revealing the code – click your back icon to get the code, copy, then click the reveal button again to return to Beer52.

Get £10 off all bottle orders over £35. Reveal the code and apply to your basket.

Get £5 off all bottle orders over £25. Reveal the code and apply to your basket.

We’ve listed Beer52 as one of the best craft beer subscriptions online in the UK.

But you can also buy beer online as a stand alone order too.

At the time of writing, Beer52 have 73 different craft beer cans to add straight into your shopping basket.

Browse the online beer shop by Honest Brew and buy beer online from lots of different breweries across the world.

By mixed cases and four packs.

Or just ALL beers!

Over 170 different items can be found including more than 120 different beers and 25+ mixed cases. If you’re on a mobile phone, after revealing the code – click your back icon to get the code, copy, then click the reveal button again to return to Flavourly.

Get 11% off all bottle orders over £25. Reveal the code and apply to your basket.

The Flavourly bottle shop has more than 140 items so a great starting point when looking to buy beer online.

You can sort the beers by average rating, new in, ABV and price.

You can even search by country or brewery if you have a particular brewery in mind.

Stock up by browsing the beer cases shop. Again, an extensive listing with more than 100 different beer cases to buy.

Free delivery on each online order.

If you’re on a mobile phone, after revealing the code – click your back icon to get the code, copy, then click the reveal button again to return to Hoppily.

Get 10% off bottles, cans and cases. Minimum spend £15. Reveal the code and apply to your basket. 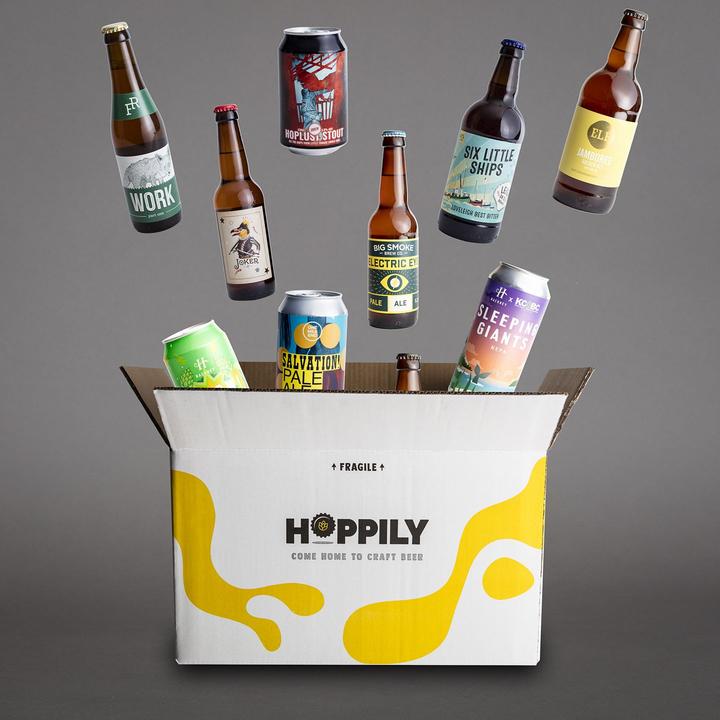 Buy craft beer online from Hoppily, they have a bottle shop with lots of beers, specifically pale ales and IPAs.

Over 40 vegan craft beers are included in the range.

Browse by brewery, over 30 different ones are listed here.

It could be argued that Beer Hawk is the best craft beer shop online. Why?

When you browse by ‘all beers’, over 2,500 options appear. So you’re not going to be low on choice.

Buy beer online from Beer Hawk with free delivery over £50.

The Great British Beers Mixed Case is a strong seller with 15 bottled beers for £35.

I also like the look of the IPA and Pale Mixed Case with 12 beers for £30.

Want to reduce your alcohol intake but still drink beer?

Highly recommended as one of the best low alcohol beers you can buy online.

Buy beer online at Skinny Booze. They are one of the best websites to buy low alcohol beer and low calorie beer online with a super selection. Established in 2012, they’re one to explore.

What are your favourite beers?

What are your favourite beers and breweries?

Do you buy beer online?

Have your say in the comments.

Some links in this article may be affiliate links. If you click on them we may earn a small commission.